Withdrawal from Syria Is a Step toward Its Liberation

The mainstream media and Beltway pundits have been in hysterics for a month about the Trump administration’s pending withdrawal of some 2,000 U.S. soldiers from Syria.  It’s not their usual hysterics about the need to accommodate our enemies, negotiate with its terrorists, and so forth.  This time, they’re warning about being too good to our adversaries – in particular, that our exit from the country’s sparsely populated northeast is a boon for Iran’s Islamic Republic.

Nonsense.  The deployment of U.S. ground forces in Syria three years ago was never intended to combat Iran’s creeping takeover of the country.  Quite the contrary.

Throughout the Middle East, as Martin Peretz explains in his latest column, Obama’s war against ISIS was rendered so as to support his “main foreign policy ambition, the since-repudiated Iran nuclear agreement of 2015.”  In Iraq, the U.S. military worked for hand in hand with Iranian-backed security forces to retake ISIS-held territory.  In Lebanon, the U.S. stepped up its supply of arms and intelligence to the Lebanese Army, an institution that functions as an auxiliary of the Iranian-backed Shiite Hezb’allah militia.  These inheritances have been left largely unchanged by the Trump administration.

In Syria, the Obama administration’s mission residue is a bit different.  Asked during an August 2018 press conference what things have to happen before U.S. troops leave northeastern Syria, then-defense secretary Mattis said that the U.S. needs to “destroy ISIS,” needs to “train the locals” to take over, and needs “the Geneva process … to start making traction towards solving this war.” 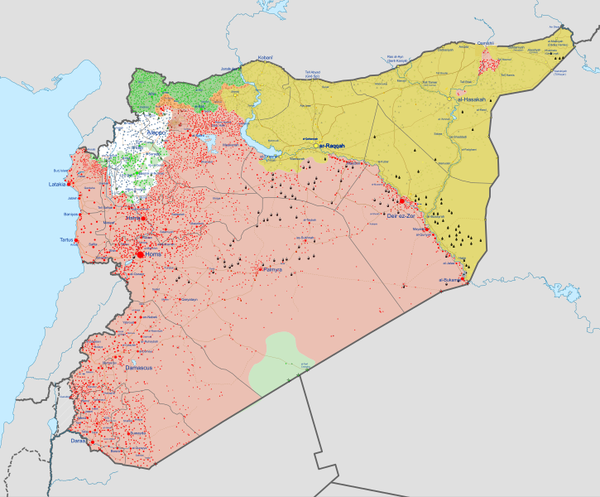 That third item refers to a 2012 U.N.-sanctioned framework for ending the war that mandates that the government and opposition agree to form a transitional government by “mutual consent.”  The Geneva process was the basis of the Obama administration’s catastrophic Syria policy, which sought to arm moderate Sunni rebels just enough to pressure Syrian president Bashar Assad to negotiate the terms of his departure, but not enough to overthrow him.  Obama assumed that Iran, grateful for the terms of the 2015 nuclear deal, would encourage compromise to break the stalemate.  Instead, it sent in tens of thousands of foreign Shiite fighters to help Assad pursue absolute victory.

No one still thinks Assad can be made to accept a government of “mutual consent” now that he has recaptured most of the country.  Talk of “Geneva” is shorthand for the U.S. having a voice in the negotiation of a postwar political settlement, which would mean indirect engagement with Iran’s proxies.

Establishing multiple points of indirect engagement with the U.S. and Europe through its regional proxies is one way Iran avoids concerted international action against its threats to regional peace.  A Western government contemplating a U.N. draft resolution condemning Iranian missile tests, for example, has to stop and consider how this action will affect its affairs in Lebanon, Iraq, Syria, and so forth.

Fortunately, the Trump administration is serious about fighting Iran’s hegemonic ambitions.  It understands that Iran’s grip on much of the Middle East cannot be negotiated away.  Given the American people’s diminished tolerance for sending its sons and daughters into harm’s way, the only practical ways to fight Iran are stepping up outside financial pressure on Tehran itself and backing to the hilt those in the region who resist its advances.

Trump’s reimposition of tough sanctions on Iran and staunch backing for Israeli prime minister Benjamin Netanyahu and Saudi crown prince Mohammed bin Salman (MBS) are the key pillars of this strategy.  In countries where there are no longer any internal forces willing and able to resist Iranian domination – like Lebanon, Iraq, and now Syria – the president understands the need to minimize points of engagement with Iran’s proxies.  Syria is the easiest of these links to cut.

I sympathize with Syria’s Kurds, who did more to fight ISIS than anyone else in their God-forsaken country, and the Trump administration should do its utmost to prevent aggression against them after the U.S. withdrawal.  But one thing I’ve learned in more than two decades of Lebanon activism is that my country won’t be free until Iran’s broader bid for regional hegemony is defeated, and the same is, unfortunately, true of Syria.  The U.S. presence with Syrian Kurds is a sideshow that alienates allies without moving this overarching mission forward.

In the long run, the Trump administration’s strategy of squeezing and destabilizing Iran itself, while bolstering the Saudi-Israel-Jordan axis as a regional counterweight and eventual victor, offers the best hope for Kurds and non-Kurds alike in Syria and the broader Middle East.

What to Do with Syrian and other Refugees?